With a new job offer in hand, I racked my brain for my next impromtu trip, as I think that job transitions should always incorporate some personal time off (if possible).  I had been weighing my options and was leaning towards a trip to Colombia when my high school friend, Trish, told me she was going to Myanmar for exactly the same two weeks I was heading out of the country.  After a few minutes of G-chatting, I was on Kayak.com and bought my ticket to Bangkok and onto Yangon!

First, Trish and I flew into Bangkok and spent 2 days together there while we got our Burmese visas.  It was a great opportunity for me to get two custom made suits.  I paid $171 per suit and had custom made suits 24 hours after walking into the tailor’s shop.

My father had warned against the political protests in Bangkok, sending me email after email about the “situation in Bangkok”.  Upon arrival, we learned that there were 8 sanctioned protest sites.  Unbeknownst to us, we chanced on a protest site on Sukhumvit Street and found the street lined with tents, vendors selling t-shirts that said “Shutdown Bangkok, Restart Thailand”.  There was a stage with performers, but there was no violence.

After our brief stint in Bangkok, we boarded an AirAsia flight to Yangon, went to bed immediately as we knew we had a full day the next day.

On our first full day in Yangon, we visited the Shewdagon Pagoda in Yangon, which is the most important religious site for Burmese.

In the afternoon, we took the Circle Train, which goes through the Yangon “suburbs”.  It was interesting to watch life come and go, to pass by markets set up at the train station, to see the houses change from sturdy structures to huts, to see the hawkers selling fruit and corn, and to see the women farmers enter and exit the train with 6 cumbersome bundles of cauliflower, tomatoes, and other vegetables.

Watching boys as young as 12 with rotten, red-stained teeth from months or years of chewing on the addicting betel nut and spitting the juice out the door of the train was sad.  Yet, seeing the locals sit on the train for an hour or more, content to watch life go by, with nary a book, or a smartphone to entertain them, was an important reminder that life – without distractions of the modern world – is enough to content us. 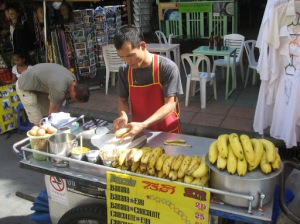 After nearly 40 hours of travel (Chicago -> Kansas City -> Los Angeles -> Taipei -> Hong Kong -> Bangkok), I arrived in the heat and humidity of Bangkok. After finding a room for the night ($6), I immediately set off to Khao San Road in search of some banana roti, which is pictured here. This is my favorite Thai snack by far (and totally for the tourists, so its authenticity can be argued, but I don’t care because it’s downright delicious). I ran some errands (bought a guidebook and a jump drive) and had dinner with a guy I met on the bus in from the airport. For all you LOST fans out there, this guy was literally a doppelganger for Charlie from the show. I went to sleep early and woke at an ungodly hour (thank you jet lag). The next day I just chilled in Bangkok with a couple of guys that I met. We spent the day eating, drinking and talking. It was very relaxing and much needed before my 24 hour bus ride to Penang, Malaysia.

Then, I hopped on a night bus to a town in southern Thailand so I could make my way overland to Malaysia. The bus for backpackers is a VIP bus, which means the seats recline, there’s a couple of movies that they show, it’s air-conditioned and it’s filled with other backpackers. Well, the one empty seat on the bus was next to me and a little while into the bus ride, I get woken up with a reserved sign that I’m to place on the seat next me. Fine. Shortly thereafter, the one Thai person gets on the bus and sits next to me. I had my blanket on me, his was behind his head. He grabs my blanket and starts wrapping it around his legs. I tap him on the shoulder and hand him his blanket. He just nods and then puts his blanket over both of us. Fine…. UNTIL I feel his hand pressing against my leg. So I kind of shake it off. Two minutes later, the same thing. And so we repeat the process for quite some time. Finally, he gets a little more aggressive, so I do too in my shaking him off. Finally, I sit up and indicated with my whole arm that he needs to keep to himself in his seat. After a bathroom stop at a non-descript locale, I make sure to take my own blanket. Long story short, he proceeds to keep putting his hand on me and at one point tries to spoon as he puts his hand on my waist. I don’t know if he’s just trying to cop a feel or steal my money belt, but basically I just told him “No” louder and louder and would pick up his hand and drop it back on his lap while saying “No touch.” He finally dozed off. It’s not that big of a deal, but just kind of a hassle to deal with.

And now I’m in Penang, Malaysia which is reknowned for it’s food – a mix of Malay, Chinese and Indian. I had a delicious Indian dinner – served on a large banana leaf no less! And now I’m just waiting for my friend Becca and her boyfriend Theis to show up!