After Hsipaw, Trish and I headed to Lake Inle, with Beth, the Australian girl we met on our flight to Yangon and with whom we trekked around Hsipaw.  Lake Inle is apparently Myanmar’s most popular tourist destination and the town at the northern part of the lake, Nyaungshwe , was the only place in Myanmar that had a backpacker feel to it, as the streets were lined with travel agencies, bookstores, internet cafes, massages, and restaurants.  Lake Inle sounded beautiful and I was curious about this method of leg rowing that I had heard that the fishermen use.  We arrived in Inle Lake/Nyaungshwe in the middle of the night and were given some mats to sleep on on the floor as no room was immediately available.  The next day, we wandered around and ate at the Pancake Kingdom, which was a delicious respite from rice and curry!  We interneted, ate street food, and I got a one hour long four-hand massage, for only $5.

The next day, we hired a boat (a very long boat) and the three of us cruised around Inle Lake, which was great!  In the morning we saw fishermen.  The men stand on the bow of the boat and with one leg wrapped around the paddle, paddle the boat forwards.  It’s an unusual method, but apparently helps them to see over the reeds in the water, since their view would be obstructed if they were sitting. 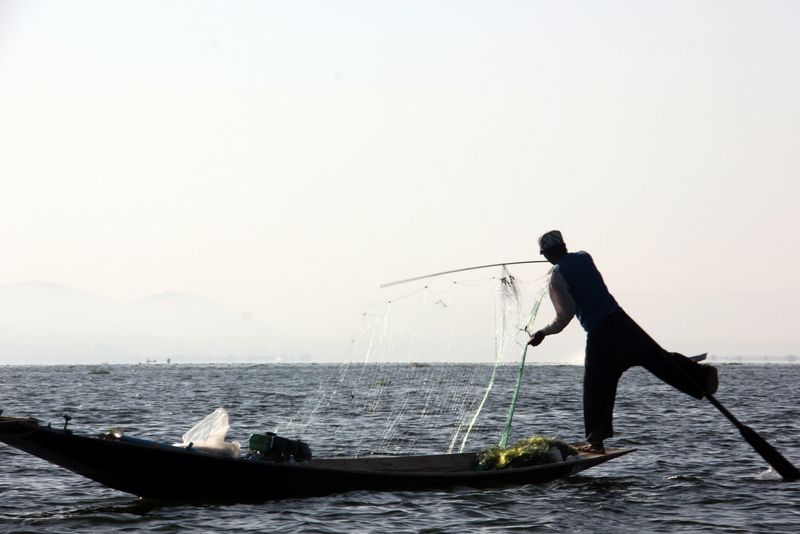 A fisherman on Inle Lake, using the leg rowing method of paddling 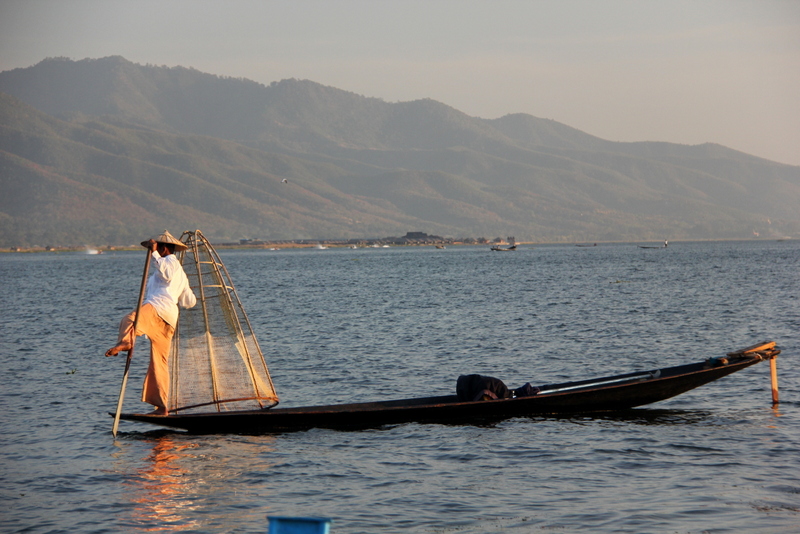 Our boat driver took us to a number of touristy shops on the lake – a silver shop, a fabric shop, a monastery, etc.  While designed entirely for tourists, each stop afforded us the opportunity to watch craftsman practicing their craft – be it designing silver jewelry, weaving fabric, or building a delicate umbrella.

The frame of an umbrealla 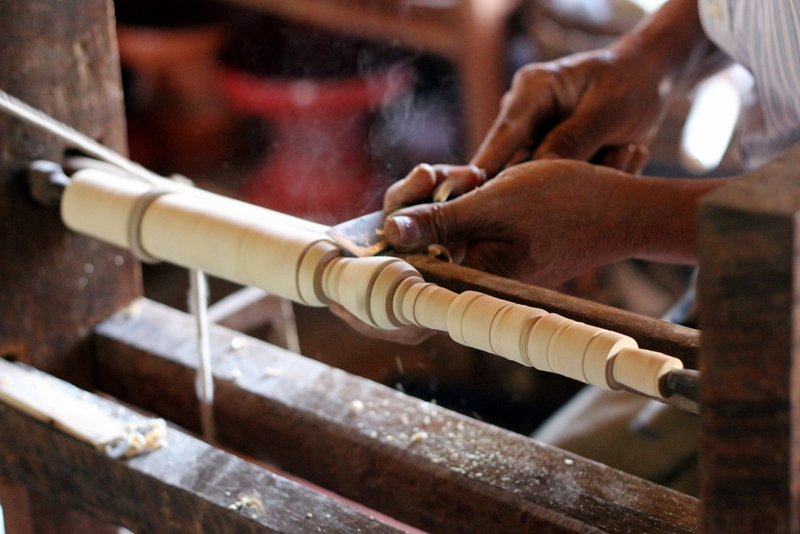 Carving the handle for an umbrella 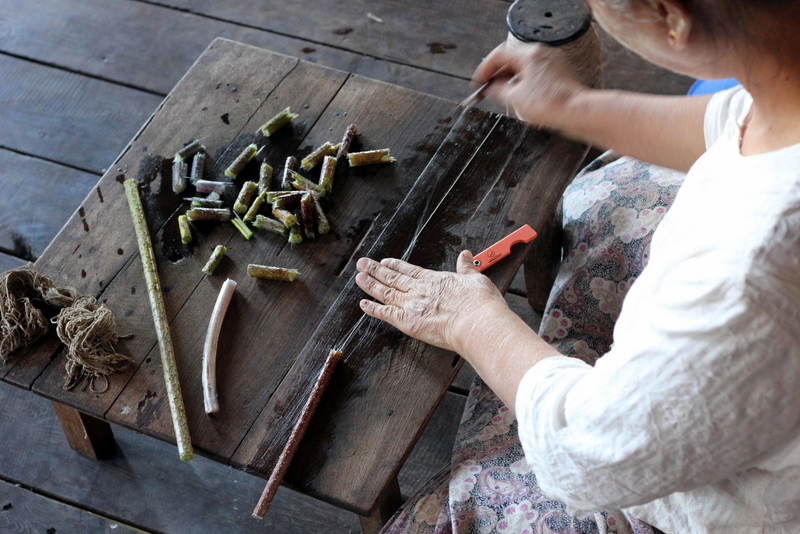 Creating string/yarn (to ultimately be used on a loom) out of the stem of a lotus flower. This was my favorite thing to watch/learn this day. 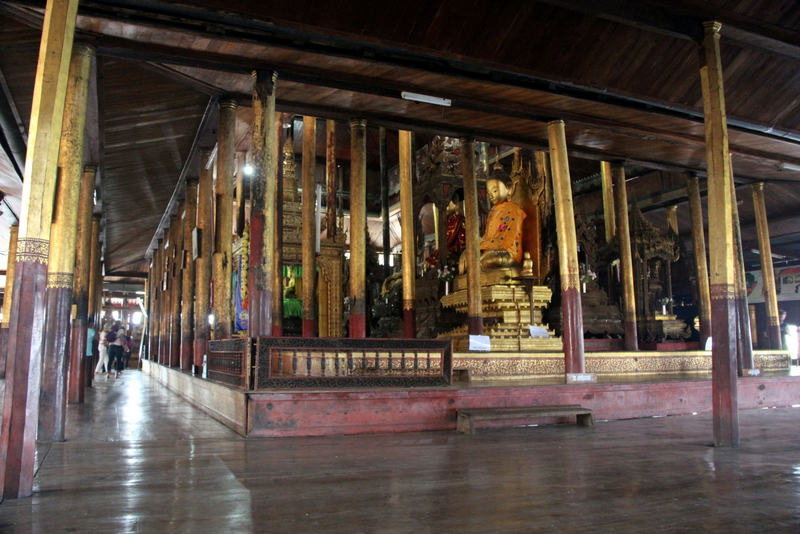 Aside from stopping at touristy little shops, it was fun to cruise around on the boat and pass by floating gardens (made from copious amounts of reed from the lake), or entire villages of stilt houses – built entirely over the lake.  Instead of a school bus, children were transported home on a boat.  Houses had electricity despite being located entirely on the water. 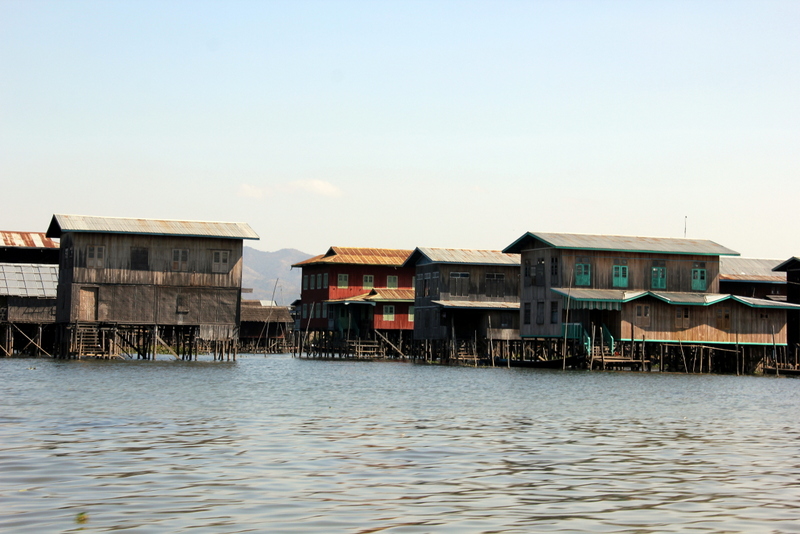 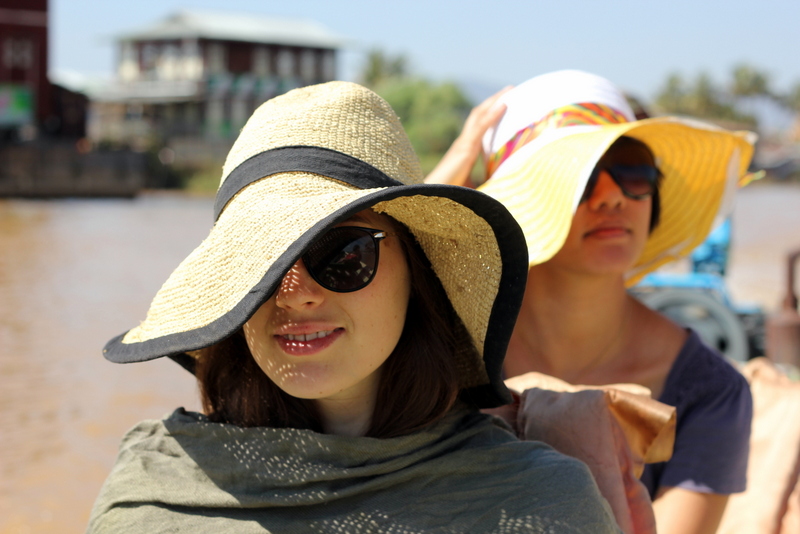 Trish and Beth looking quite glam on the boat ride

As daylight waned, we watched sunset over the hills beyond the lake before returning to town. 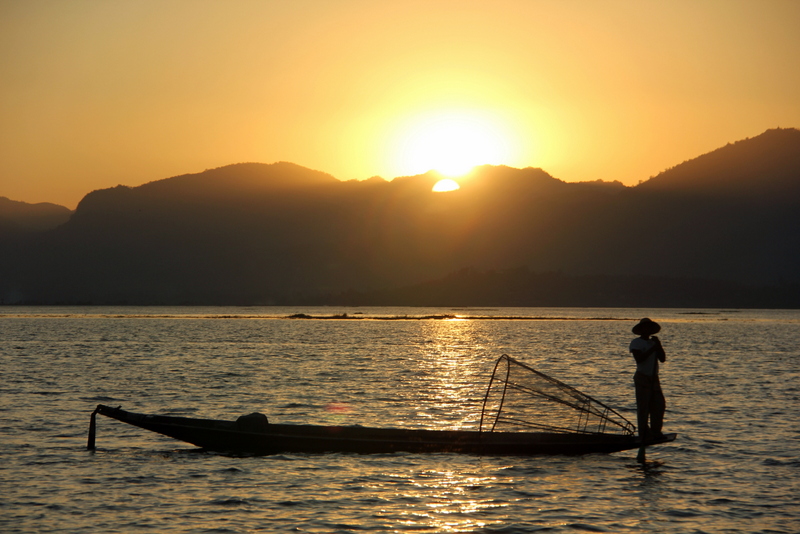 We spent one more relaxing day in town – more interneting, massages, sitting at a coffee shop reading, etc.  It was a great way to end our time in Myanmar.

We eventually made it back to Yangon, enjoyed a very brief afternoon there, walking around, breathing in that familiar, but slightly sickening aroma of betel nut.  Yangon’s sidewalks are stained with red splotches of spit – and the poorest of the locals teeth are stained red from the betel nut that they habitually chew. 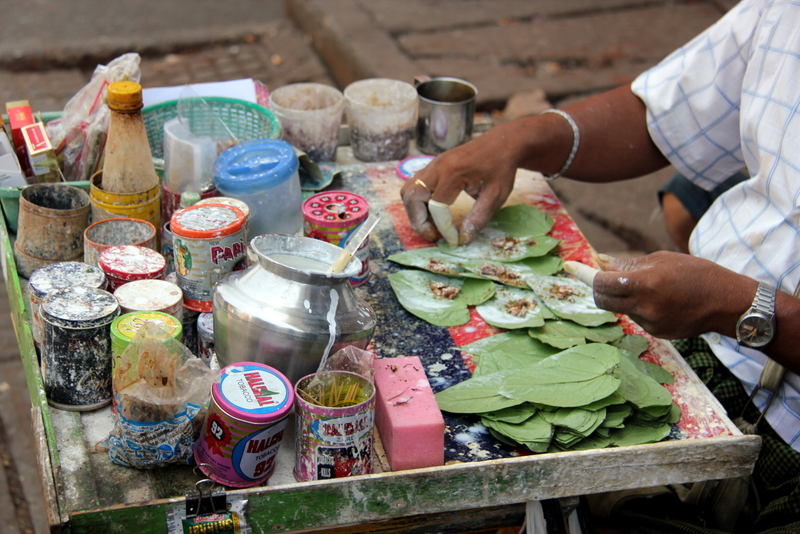 Betel nut is prepared on the street in Yangon

After departing Yangon, Trish and I sadly parted ways in Bangkok.  I rushed to enjoy my final night of my trip, only to discover that my flight was cancelled.  I re-booked my flight for a day later and spent an entire day in Bangkok getting 3 massages, eating well, and relaxing by reading and sipping a cocktail.

All-in-all, Myanmar was a great trip and a fantastic country.  The borders only recently opened to tourists, so its not a very developed country, despite the fact that wealthy speculators from Singapore and China are building developments.  The people were consistently very friendly, genuine, not jaded by tourism, and not pushy, which all contributed to a pleasant traveling experience.  The food was good, even if rice and curry three meals a day got a tad repetitive.  We spent about 10-ish days in Myanmar and while I think we could have spent a few more, it was the perfect two-week trip (including our time in Bangkok obtaining our visas.  Myanmar is beautiful, historic, and a bit of a hidden gem!