From Yangon, we took an overnight bus to the ancient city of Bagan.  While less famous than the nearby Ankor Wat temples in Cambodia, the stupas of Bagan rival Ankor Wat in terms of impressive historic religious sites.

We spent two days biking by the stupas and often stopping to enter and explore the insides.  Though all stupas were of varying size, all that we visited had some significant similar features: generally square construction with an internal hallway (some were small and cramped and required bodily contortions to fit through and others had massive hallways) that had 4 buddha statues.  We respectively walked clockwise through any building we visited

Bagan was the capital of the Kingdom of Pagan.  During the height of the kingdom (11th to 13th centuries), over 10,00 Buddhist temples and pagodas were constructed.  Today, reports vary, but between 2,200 and 3,200 of these structures remain (in varying condition) and are scattered across the plains in and around Bagan.  After awhile, a temple is a temple, but Trish and I really enjoyed riding our rented bikes (my butt enjoyed it less so since it was hard to find a bike that a) fit a tall person and b) had tires that didn’t deflate mid-ride) through the countryside, with a seemingly endless supply of beautiful temples as our backdrop. 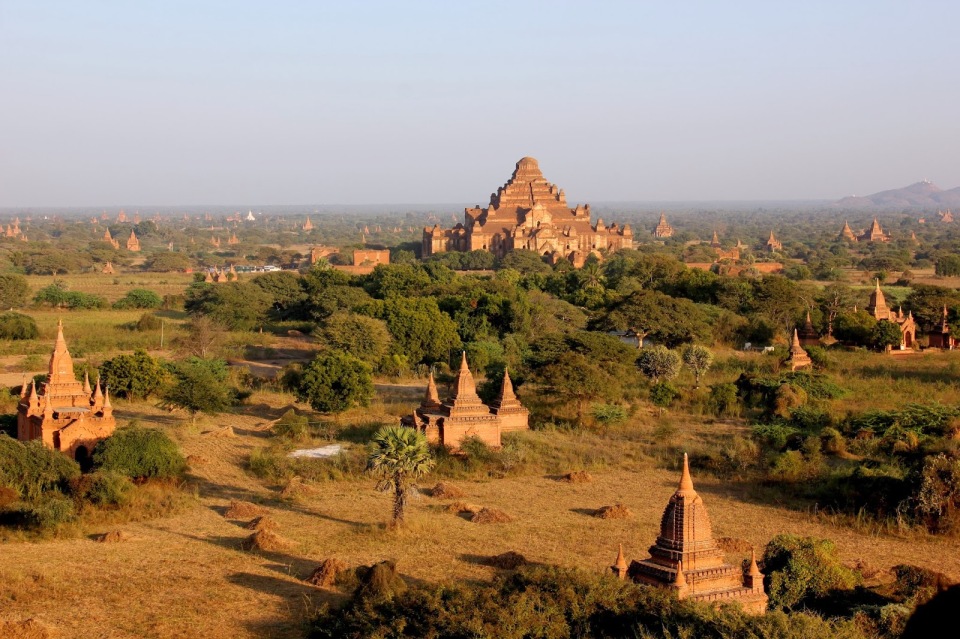 Once we tired from biking, we climbed Shewsandaw Pagoda’s steep and narrow steps to wait at the top for the world to turn so that we could enjoy a breathtaking sunset from one of the highest points in Bagan

The views were stunning: