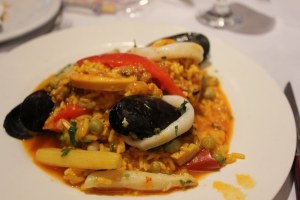 I took an overnight bus from Mendoza to Buenos Aires and immediately headed to the ferry terminal and caught a ferry to Colonia, Uruguay and then a bus to Montevideo, the capital of Uruguay. I initially planned on heading straight to the beach, but realizing that I had more than enough time here, decided to hunker down for the night in Montevideo. I wandered around the city with two Canadians that I met on the bus from Colonia to Montevideo. We had probably my best meal here yet. One guy got a steak that looked absurdly good and the other and I shared a paella. I’d have preferred steak, but he was jonesin’ for some paella and it was a dish for two. And it was good and I’m always happy to eat fresh seafood.

The day was fairly relaxing, which I needed after 24 hours of bus-ferry-bus travel.

We cooked dinner in the hostel and stayed up to 2am talking, and as I fell asleep around 3am (very early for this part of the world, mind you), the local Argetinians and Brazilians staying in the hostel were still partying quite loudly. I imagine they left around 4am to go to the bars and ambled back around 10am, which was when I woke up for breakfast.

I left for the bus terminal and headed to La Paloma. At the bus terminal, I bought some Pringles for my ride and as I got my change back from my $200 Uruguayian note, I realized that my precious Pringles cost me $7. In a country that not only has soap, toilet paper, and paper towels in every bathroom, but also allows you to flush your toilet paper down the toilet, I suppose I should have expected some dearer prices, but my goodness!

I arrived in La Paloma and was honestly, pretty disappointed. My hostel in Montevideo recommended a cabana by the beach. It sounded perfect and the price was right. As the bus left me in the dust at the side of the road, I wandered across the street to a campground and was shown my “cabana.” Unfortunately undeveloped experiences are somewhat lost on me, since I don’t speak the language and honestly, this campground wasn’t so different from an American one. I walked along the beach and to the center of town hoping to find surfers galore, but the beaches were mostly deserted (but not in the cool, beautiful Indonesian kind of way) and the town, more or less a ghost town. So, I decided I would rest up, leave in the morning and head to a different beach. I took advantage of not being able to communicate with anyone by going to bed early and catching up on some much needed sleep! 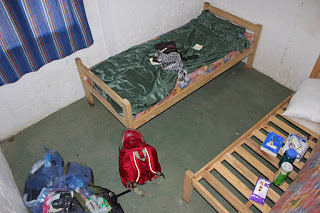 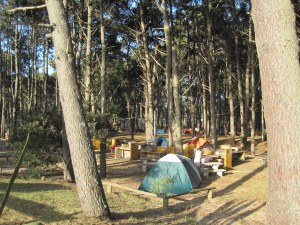 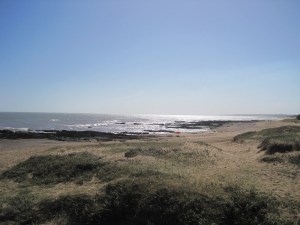 RV at the beach: